To the best of this group's knowledge, has anyone ever tried using Tesla Valve (http://fluidpowerjournal.com/2013/10/teslas-conduit/) as either a stand-alone suppressor or as an expansion chamber conduit, combining both concepts as a sort of hybrid design? I would think that a Tesla Valve of adequate volume in its chambers would trap and cool gasses better than any conventional design, although the pressures could be quite high, and actually fabricating one would be a gold-plated bitch.
Top

Actually this is pretty much what the scoops, mouse holes and similar asymmetrical designs try to achieve. By creating gas flow across the bore line you can create turbulence that greatly impedes the flow.
Top

You might also look at the OSS cans. they have a rather unique design that vectors the gas.

alordnapa wrote:To the best of this group's knowledge, has anyone ever tried using Tesla Valve (http://fluidpowerjournal.com/2013/10/teslas-conduit/) as either a stand-alone suppressor or as an expansion chamber conduit, combining both concepts as a sort of hybrid design? I would think that a Tesla Valve of adequate volume in its chambers would trap and cool gasses better than any conventional design, although the pressures could be quite high, and actually fabricating one would be a gold-plated bitch.

These are way cool but difficult to employ.
If you use them to feed high pressure gas into a chamber the expanded cooled gas will flow back out with little resistance because the pressure has dropped.You can build them smaller so the reverse flow pressure will be less but you will need a large number of them to make the forward resistance low.The valves could be etched or stamped but a CNC mill would be best in my opinion.
If you really want to try these I worked out a plan years ago and still have the notes.
PM me -CL
The only reason after 243 years the government now wants to disarm you is they intend to do something you would shoot them for!
Top

sounds like it may work in the same idea fashion that Crux suppressors work , not so much as increasing turbulence but causing the gasses to stay in chambers longer due to a "vortex" or "eddy" created by the core's baffle
Top

T-Rex wrote:The last 20 seconds of this video depict a cylindrical version, of this design.

Yes and it only works as there is no hole in the middle. as soon as one would make a passage that would allow a bullet to travel thru in one line most of the TV function will be lost.

But that is my non scientificall 2 cents

Why make this harder than it has to be?
NP
Top

delta9mda wrote:Why make this harder than it has to be?

Are you serious about that question, or is it rhetorical?

Its really quite simple (As most really great ideas ..

Tesla's "valve" simply redirects a significant proportion of a mass stream (liquid or gas) to interfere with the other part of the stream in almost the opposite direction.

The same principle can be (and is!) applied to a lot of silencer designs .. but perhaps not quite as "radically" as in the Tesla valve.

As long as the pressures are very high and the "mass-stream" is very homogeneous (like a liquid or high pressure "clean" gas) it works much better than just "disturbing" and slowing down the moving mass .. (of gas or liquid)

An actual firearms "suppressor" lacks one of the to "requisites" for a dramatic effect, namely the "homogeneous" mass-flow ... while it has plenty of pressure differential to work with, its a multi-part moving mass system .. Bullet-- gas and particles, all vastly different properties ..
You do not want to interfere directly with the bullet (unless you use "wipes" and an not concerned with accuracy) and the mixture of hot gasses and hot particles are what you have to "work with" .. The way these can be "redirected" and made to interfere with the flow are highly influenced by the chaotic nature of the gas/particle mixture -

The Tesla valve does not work very well if it has to work with a liquid with a lot of air-bubbles.. or an air/gas-stream with water droplets ..

The Tesla Valve and suppressors have one thing in common though: The longer they are, the better they work ...

"Sapere Aude": Dare to KNOW!
"Do not adjust your mind, there's a fault in reality!"
"When Wrong becomes Right, Resistance becomes our duty!"
Postal code 8541
Top

delta9mda wrote:Why make this harder than it has to be? 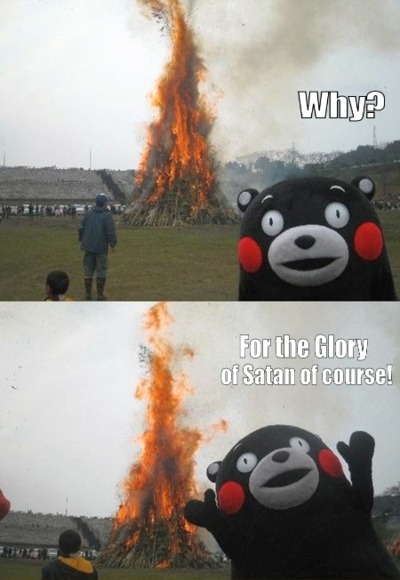 Just to Stir the pot. 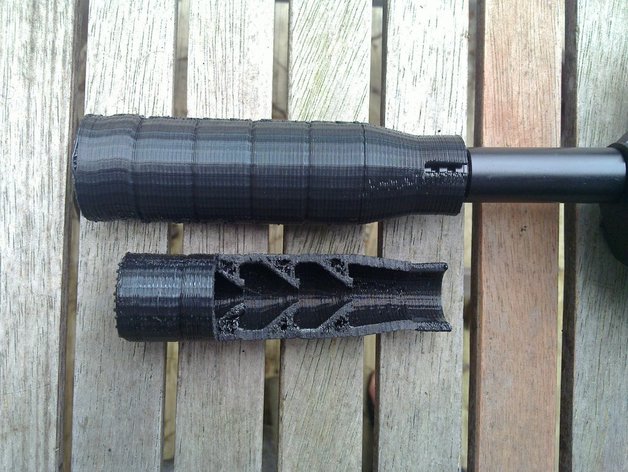 gunny50 wrote:Just to Stir the pot.

T-Rex wrote:Is that a 3d printed can, wrapped in duct tape?

T-Rex wrote:Is that a 3d printed can, wrapped in duct tape?

My guess, no duct tape just 3d printed showing it had some internal stresses by the looks.
Top

gunny50 wrote:Just to Stir the pot.

This looks rather a lot like a cross-section of a K baffle stack, only lacking the cross-bore jetting and with slightly more graceful curves. Those sharp points at the entry points might stand up if in stainless or Ti, but aluminum would probably break down under regular use.

Yeah, fast application of hot glue style 3D printing results in some messy surfaces, but must be fun to play with in trying out suppressor ideas. Not seeing duct tape, just a lot of layers and some shrinkage around heaver concentrations of material.

I'd be more curious to see how a 3D printed can performed when using tessellated structures similar to what one finds in those 'zero noise' acoustical laboratories. With sintered Ti printing such as we're now seeing produced in NZ-made suppressors, it couldn't be any more difficult to design a series of some hundred or more long, narrow, hollow (perforated) cones pointing towards the muzzle, leaving a bore similar in scale to 'traditional' baffle bores but with no rings, no layers. Just a lot of spires with a lot of surface texture, deflecting noise/pressure in every direction except towards the exit. Been wondering why something like this hasn't surfaced yet, considering it's an obvious next step, but one which would be fantastically difficult to machine and only marginally easier to assemble in a welded structure.
Top

This design is very interesting, but it seems to be a very limited use of Tesla's fluid dynamics. ( Did it work?) I know, or rather suspect, that Tesla did not have projectiles flying
through his valve in mind, and the symmetrical design was probably forced on the designer of the printed suppressor by lots of practical factors. ( Presuming to Know what Tesla thought is almost like presuming to know the mind of God; He was a very special sub-species of human!) Other than by lost wax or similar casting methods, it would be pretty darn tricky to bring the 2D design into a true 3D world, ( As opposed to just replicating the valve as if it were a 2D fluid diode instead of a multi-angular design, and creating the valve effect in multiple phases in one device) 3D printers are pretty cheap these days. I would think that the design shown here, either as an intentional cross-section or as a literally exploded prototype would be very nice for a low-temperature application of pulsed air, like an Air Rifle. ( I suppose if you cast it or Sinter-3D printed it in silver or copper it might work nicely on a true firearm) I appreciate all the ideas, and it really goes to show that "There is nothing new under the sun". The Combined Laws of Gasses still seem to be the law; not just "guidelines"! I live in the People's State of Kalifornia, so when I have an idea I have to convince one of my SOT to try and implement it. ( Yes, we have a few, even in Kalifornia) But I will leave this idea to mechanical engineers and fluid dynamicists, I am just a lowly MSEE, and tend to view things colored as electron flow...
Top
Post Reply
18 posts • Page 1 of 1