i took off about as much as i was comfortable with to fix some ugliness that happened during turning the can.

Ultimately I'm not as happy with it for the main reason of how the end caps were welded on. I took it to a machine shop that does some great work near me. I ASSUMED that a good machine shop had a good welder... Shouldn't have done that. I specifically asked for it to be tigged and when i came back to get it, it was clear that it was migged. It was a structurally strong weld, just very ugly and took a lot of work to clean up. You can still see it all in the final product and even though i glass blasted it the welds are hard and didn't match the rest of the cans texture.

Aside from that im happy with it performance wise. It's really a lot quieter and safe to shoot w/o hearing protection. I was worried about the final thickness so i put the ears and eyes on in preparation in case it came apart. I did a full auto mag dump *cough* bump fire *cough* and it performed great. That's about as much abuse as i would ever put it through and don't plan on using it on a shorter barrel.

If it ever comes apart then lesson learned. Just hoping the big blast chamber is my saving grace. Final weight is 17.875oz, so a good little bit lighter than my .308 can

The host is a yhm lower and stag 3g upper (vortex viper pst 1-4x optic, warne mount, giessele sd3g flat trigger for those concerned with any thing else) 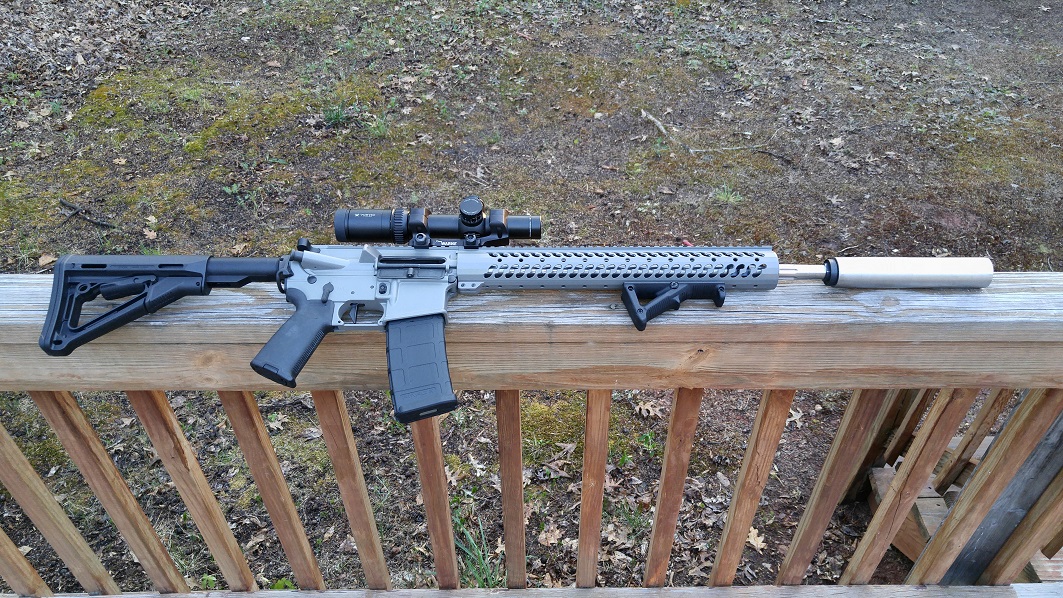 I really like how the glass bead finish came out 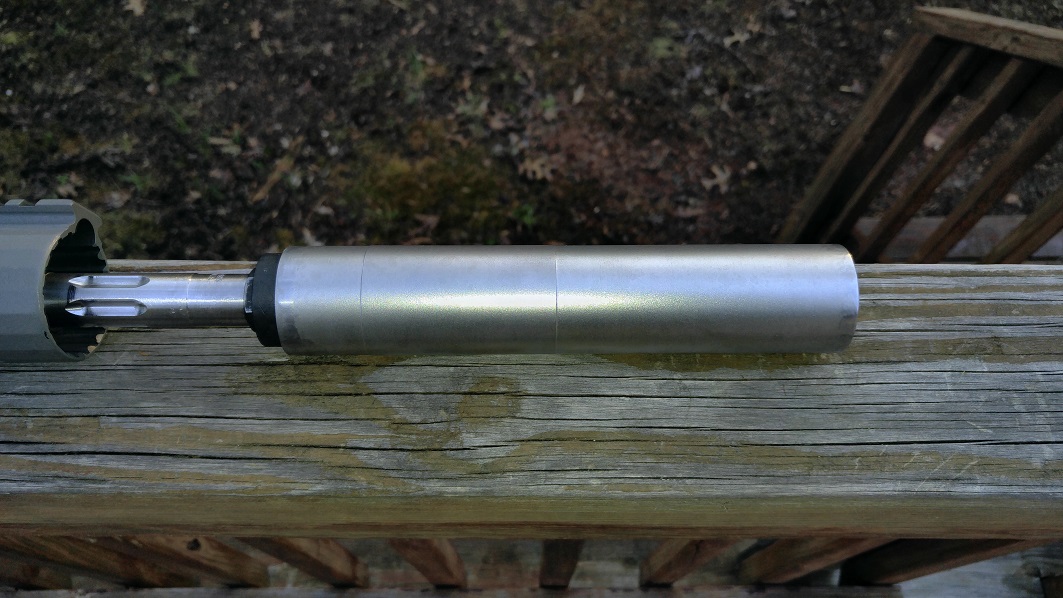 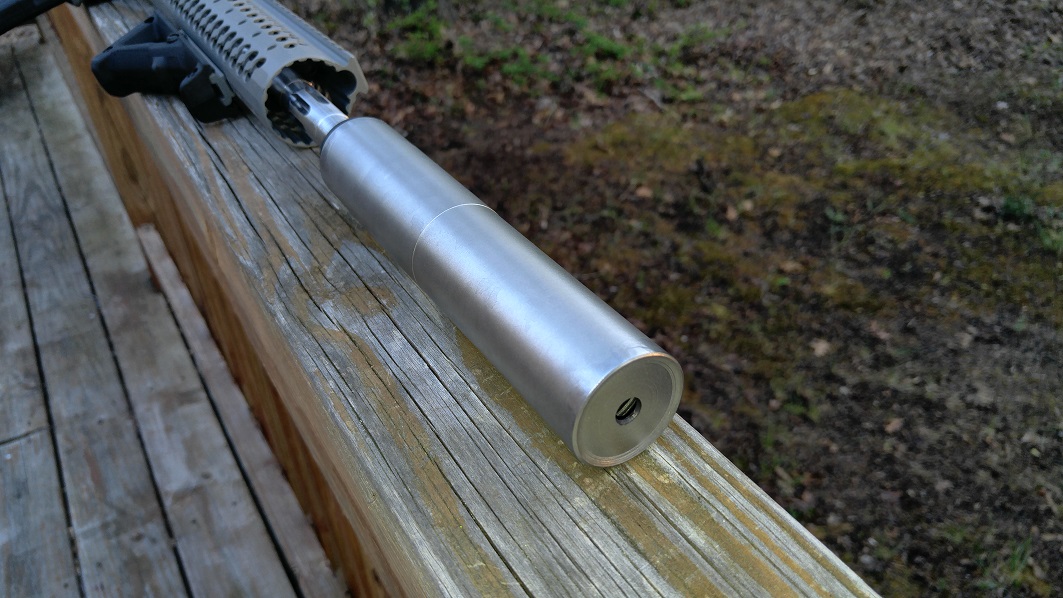 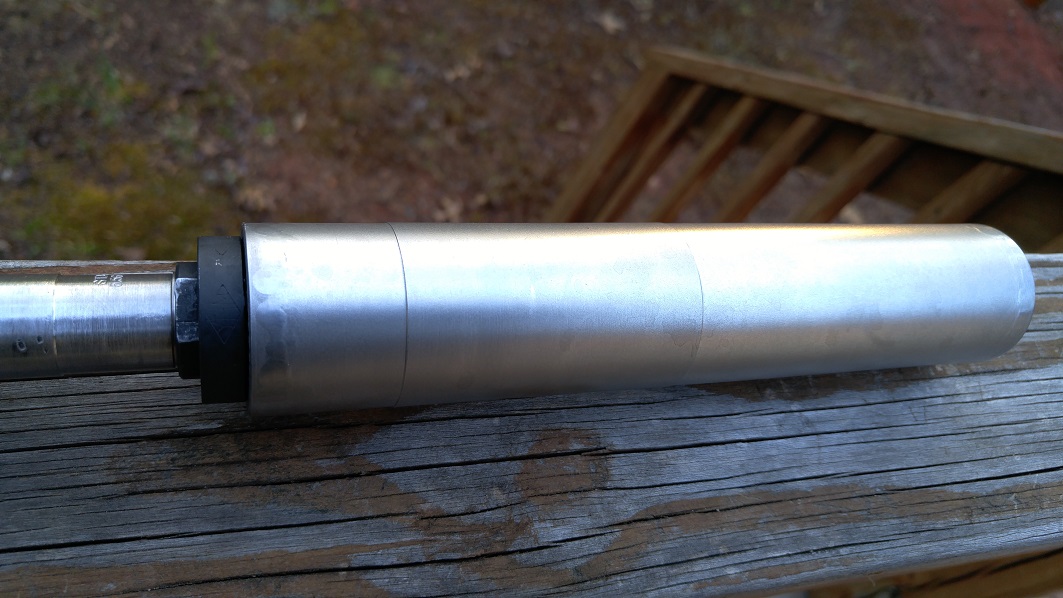 I had got the yhm end cap from a guy that makes parts for those "solvent traps". He was cool enough to just send me an unfinished one without threads so i just turned it down and hollowed it out so it serves as the end cap and blast chamber spacer 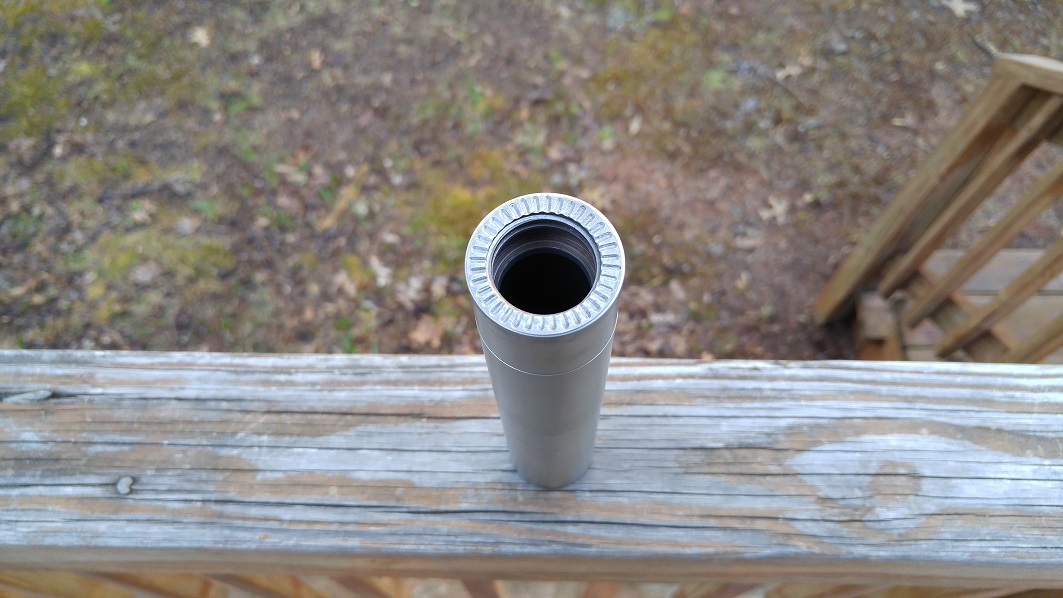 These are the internals. Ignore the tall spacer to the right. That was before i decided to go the QD route. I decided to use the same 60 degree cones like my 308 can since they worked so well. 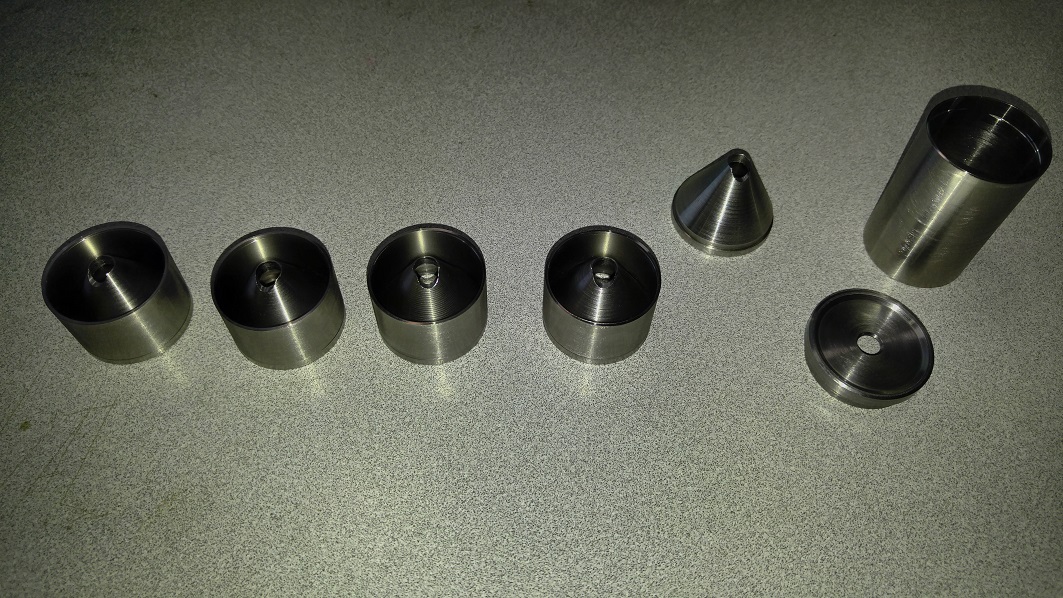 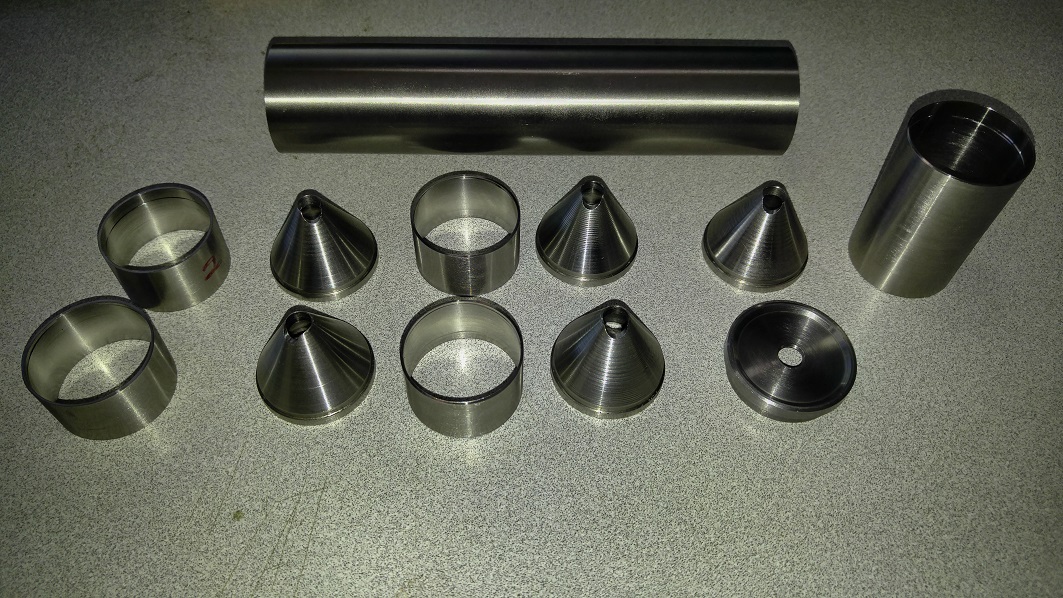 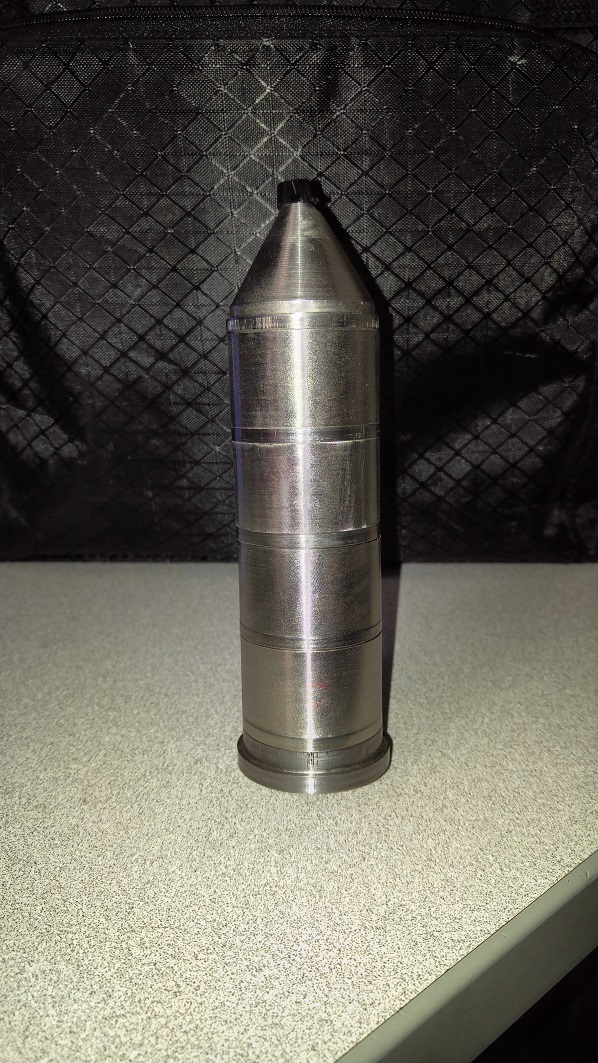 Well, just from my novice viewpoint, that looks good. I just hope my effort (once my Form 1 is approved in a few months) looks as good. I'm reading and learning for now, next step will be to make decisions what method to use for construction. I'm spec'd at 10", so I expect that's a fixed length. I've got some 1.5" .058" moly chrome tubing.

Lookin good, just started my path down the F1 can road.
Top

Paint it black with VHT paint and you'll never notice the welds again!

Good lookin can though.
Top

I don't see any issue with the welds.Tig is great but Mig is better when welding a suppressor.Blast that with aluminum oxide and apply a good high temp epoxy finish or shoot it with glass beads and leave it alone.Don't forget the attractive brushed finish that is a great option.

If you build another you can save lots of weight in construction and welding.
The only reason after 243 years the government now wants to disarm you is they intend to do something you would shoot them for!
http://www.silencertalk.com/forum/viewtopic.php?f=10&t=79895
Top

well i initially wanted to do the brushed finish to match the barrel. It was my plan all along to leave it unpainted. Then i was cleaning it up with the glass bead and thought it looked nice with that finish so ill leave it as is. Had no idea the MIG was a better option. TIG always looks nicer so i assumed it was also a better/stronger weld.
Top

Looks awesome , im sure its sound great as well
MIG welding is nice for very thin stuff like tubing because it cooler , you don't get as much of a heat effected zone around the weld , I personly prefer TIG but as long as any of them are don't properly you will have great results.
Top

If anyone says anything about the welds tell them to build one themselves then they can complain about yours.

Paul
"The number of people that I've killed is not important. What is important is how I get along with the ones that are still alive."

"A veteran - whether active duty, retired, national guard, or reserve - is someone who, at one point in his or her life, wrote a blank check made payable to The 'United States of America', for an amount of 'up to and including my life.'" (Author unknown)
Top

Got around to working up a better load for this rifle and I'm happy to see it will still shoot less than 1/2 MOA at 100 yards with the suppressor on.

I'm sure i could do better but I'm happy with it taking all the variables into account like using the giessele sd3g (totally not the trigger for shooting groups), the 4 power optic that my eyes could barely see the target with, and looking through the mirage coming off the can... Which by the way was the first time I've actually seen that. It's pretty cool but also extremely annoying.

The only reason after 243 years the government now wants to disarm you is they intend to do something you would shoot them for!
http://www.silencertalk.com/forum/viewtopic.php?f=10&t=79895
Top

Haha yea. I suppoooose I'm happy with it
Top