I do intend to go for the fast burners. The gas system is completely out of the equation and I'm going to just manually hand cycle everything with this project.

Sometime in the future, I may put all the DI system in, maybe, if I get bored and need something to do, but I'm trying to make this gun along the lines of the Delisle carbine gen 2 for the time being

garredondojr - I rented a 357 Herrett reamer from 4D Reamer Rentals, and am very satisfied with the results. It worked well enough that I did it again for another set of barrels (I've made 4 of these, two 10.5" and two 16"); the chamber turned out exactly how I wanted and all of the barrels are more accurate than I expected.


Read your thread on NFAtalk and it sounds like your cartridge is chambered within .020" of my plans so I may go ahead and rent the reamer from 4d (that was my backup plan) only major difference is I shortened the neck .050" more for that long bullet to have a nicer ogive profile(4s). I used this program to design the bullet and it's calculated to have a .400 g1 BC at mach 1 http://www.geoffrey-kolbe.com/drag.htm

Next time I fire up the pot i'll cast up a couple dozen bullets and send them to you to try out if you like. Just way too hot here still for casting!
Top

Sure, I don't mind trying almost anything

All kidding aside, as long as it's big enough to contact the lands and stabilize, all should be well.

There is a company that is already making powder coated lead projo's. Not sure if you have seen them or not. May be easier just to buy some already made.

I'd rather do that than shoot $1+ projo's a pop just to do load testing with. I'm sure you understand what I mean.

http://missouribullet.com/details.php?p ... condary=36
I don't care what your chart says
Top

I really like your .358 and I think I’m going that route based on the information you have so graciously provided. It just makes more sense.
Top

This is a great project. Glad to see the 9x39 finally starting to trickle into the American shooting world.
Top

I have been interested in it since I first heard about it back in 2011 or 2012 timeframe I guess. Just the fact that a military anywhere in the world was developing and making and deploying a suppressed weapon was all that it took to interest me.

There was a video on Ian's channel from the guy that owns worldguns.net (which I have looked at a hundred times) and he is quite knowlegable on the background of the 9x39. Like for instance, I had no idea that they were developing this round back in the late 1980's before the fall of the USSR.

Of course, the video is kind of long, but if you are interested in the background and development of the round, it's very interesting and worth the 30 or 40 minutes to watch while you drink your coffee and get woke up.
I don't care what your chart says
Top

Very good video with a lot of information BTW. I learned a lot of things about it that I previously had never heard of.

They even experimented some with wipes in their cans.

It's kind of a long video, but anyone interested in the 9x39, would gain a lot from it.
I don't care what your chart says
Top

Not had a chance to order my powder until next week. Some unexpected bills came up, but just wanted to show the difference between a 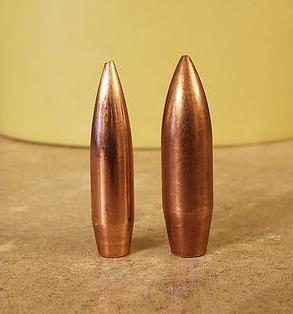 So any progress on the design of the silencer itself? I've got my own 9x39 AR project

No sir, I'm using one of my existing 9mm cans, and it already sounds better than the blk did out of the box.

My next step is to test out two hand loads (N310 and Titegroup) and see what I think about them. If they get down to as quiet as I would hope, I may not have the need or the desire to pay the tax to make a new can.

If I do ultimately decide to, I already have it planned out.

There will be an endcap put onto the end of my 16.5" handguard and an inner tube/body to hold the baffles in place and ported baffles. It will be a true integral suppressor design and the freefloat handguard will be the registered suppressor body itself.

But like I said, if I can get the handloads down to hollyweird quiet with the way that I have it set up now, that's probably what I'll do.

From looking at the magazine, I'm going to expec that you're building a true version of the gun. AWESOME !!!

I have some pictures that I'll share with you in PM that I was able to scrounge up online that you may be interested in.
I don't care what your chart says
Top

So how are you doing handloads? Is the wolf bimetal case reloadable?
Top

I'm going to be using 7.62x39 brass case (Winchester actually). I had a few boxes of it already so I fired them off and have them resized and ready to reprime and repowder and reload.

While it's possible to convert berdan primer over to boxer primer, I'm not going that route.

Was able to order the powder and primers which should be here early next week. I'm starting to get excited and anxious to see how it works

Will be using titegroup and N310. Both look pretty similar on quickload.

Also, a very generous forum member has been helping out with the project making a follower for it which is a world of improvement over the original. 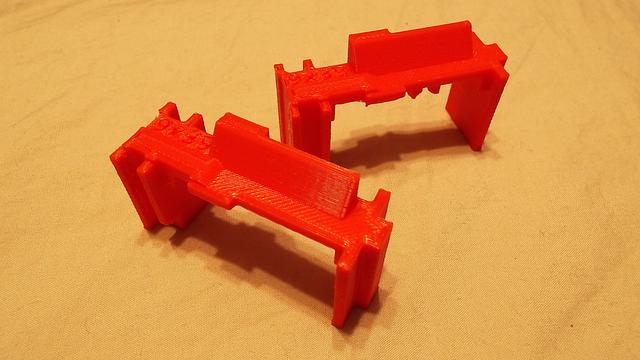 In doing some experimenting this morning, I found out that I won't be able to load the bullet as long as I had originally thought. That jammed into the throat of the chamber and pushed the bullet back quite a bit.

So, I'm going to reduce the COL and will need to reduce the powder charge some too. How much yet, I'm not sure, but probably not a huge lot.

I had planned on seating the bullet out to the full 2.250" that would fit in a magazine, but that set back the bullet to 2.213" and was a chore extracting it out of the chamber by hand, but it's better to find this stuff out now by hand than by pulling the trigger causing a pressure spike.

So, looks like I'm going to be seating the bullet to ~2.185" at first and that will allow me to tweak the COL around a little to see if I can find a sweet spot it likes for accuracy.

The factory bullets are seated the same length, and they're really accurate at the distance that I'm shooting and after I pulled that bullet and seated a fresh one, I had no problems chambering and extracting the case so that's where I'm going to start with.

One positive about the 270 gr bullet is it's considerably shorter than the factory wolf bimetal bullet. So, will give me more options for powder without compressing it. 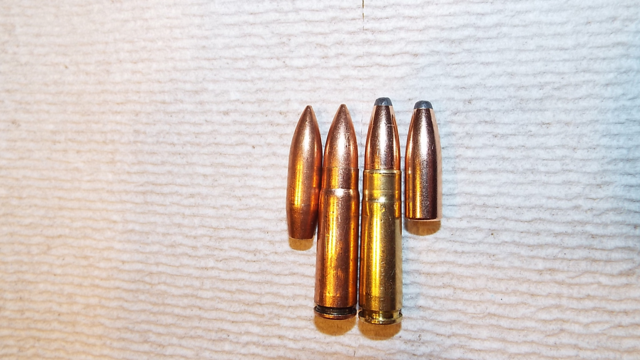 So what diameter are those bullets?
Top

The factory bimetal bullets are .364"

Since these bullets are a touch fatter, and softer, I'm hoping that it gets a better gas seal, and perhaps a little better accuracy.

The factory bullets weren't inaccurate, but a guy can always hope to improve.
I don't care what your chart says
Top

Alright, had some time to test some reloads out yesterday evening. This caliber is continuing to impress me. I think it's going to surpass the blk in my hunting spot.

There are two people on this forum that have been instrumental in helping get this project off the ground and for that, I am grateful to you !! I don't mind mentioning names, but I don't want to put anyone on the spot either but you guys know who you are.

Again, I'm going to try out two more loads of n310 this evening bumping up the powder charge and who knows, maybe it will impress me enough to try to use it for hunting too ? I just have to wait and see how it goes.

I have also been in the process of making a few soft points into hollow points and plan to shoot them into some 5 gallon buckets of water to try to catch one to see what it does and how it looks but that will be another day.

Anyway, I wanted to add the short video so you can hear it for yourself. And this is not with an integral suppressor either. As has been discussed, I have no doubt that would perform even better than my screw on 8 inch can. 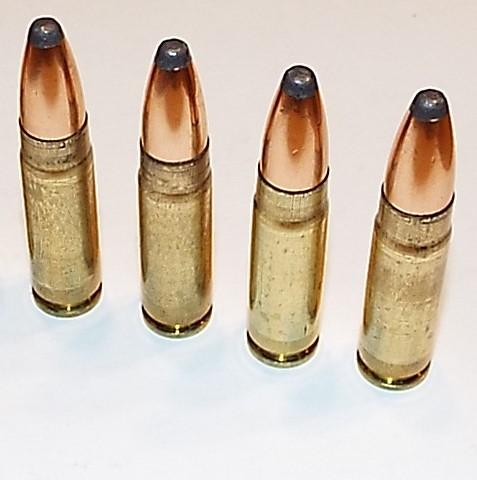 https://www.youtube.com/watch?v=JynO0KksgLA
I don't care what your chart says
Top

Listened with headphones this time and wow the N310 is quite a bit quieter than the wolf.

Hopefully you can get the N310 closer to 1k and close up the groups!

Was up to 960 fps average this evening with 7.7 gr. which was as hot as I loaded today. I'm not entirely sure if I want to push it a whole lot farther. Maybe 7.9 gr, but that's about where I'm going to stop. Though I was getting no pressure signs or flattened primers and easy extraction with 7.7.

The ES was 20 today. Accuracy was improved.

I've got an 8" titanium tube on the way. Any recommendations for baffle configurations?
Top

yeah, here are two recommendations if you're going to use it on the 9x39.

Have a VERY short expansion chamber because this being an extremely low pressured round, you'll get a lot of FRP if you don't.

As for your baffle types and spacing, that's all whatever you're wanting to do.

The suppressor that I am currently using on mine right now is 8 inch and has several of the DHC clipped baffles in it. I want to try my first 9mm can that I made on it, which is 12" long and a bunch of engine valve retainers/stepped baffles, but I don't have a 5/8-24 thread adapter that I could use with it on this gun. I really need to try that though. I am curious how the stepped baffles do with that round. I suspect very good since it works so well with the low pressured 9mm rounds that I usually send through it on my scorpion. It's amazingly quiet.

https://www.youtube.com/watch?v=8EtRelIR9zo
I don't care what your chart says
Top

Try Green Dot if you have some. It's significantly quieter than TiteGroup in any of my suppressed loads (regardless of caliber) and has a very flat tone without the sharpness a lot of powders cause. American Select is similar as well.
Top
Post Reply
86 posts