In previous posts I mentioned once seen in 1960s at Parker Hale's
'back room' a unique .22 suppressor ... surprisingly marked "MM1"
like their standard cupped baffle MM1s ... that there
has been no reference to in the literature thereafter.

Over the intervening years no reference to this model was run across.

" ... This author has come across one instance in which this design
served as a basis for a .22 LR muzzle suppressor. although it did not use
a support for the central tube as disclosed in the patent, everything else was the same.
It worked well, and because there was no need for a reasonably tight bore
diameter.the can itself was simple to build due to the low component count."

A South African can, Volume 2 on Suppressors, emulated this design
with an added forward expansion chamber.
Along the mode of the Rugged Suppressors Obsidian 45 two length.

With the advancements in baffle tech over the years, I would question why anyone would even need a snorkel in a 22 can these days at all.

I'll watch the video in a few minutes.
I don't care what your chart says
Top

John, your observation is correct, especially given the latest
stellar DeadAir Mask, etc. The intent of the post was two fold:

First, to document a long ago British, not well known at all,
unique can by the esteemed Parker Hale company in the 1960s
when they were still in operation.

What could be simpler than a 7"± tube, an end-cap, and a internal snorkel reaching about ⅔ inside.
As mentioned this design was granted a US patent to my surprise.

For the lowly .22 what could be simpler.

Second, The MM1' snorkel's very oddity could be compared to Carrol Shelby's
Cobra's innovative truncated aerodynamic design rear trunk. It was first proposed by
an obscure German designer ( WW2 era ??). Shelby's team 'knew it could not work' as
everyone knew that the best aerodynamic shape was a 'boat tail'.

The stubby rear implementation that dramatically reduced drag
and led to the Cobra's winning races was recently described in the history channel
documentary "Shelby v. Ferrari" which served as basis for latest movie "Ford v. Ferrari".

This weekend a note pointed to a mention of the rare MM1 whose owner in UK
wrapped tightly some copper ... a la Chore-Girl ...around the snorkel and got marked improvement
in sound reduction.

Happy New Year to all.

Mitch, may the HPA be added to some bill
in the middle of the night as the DemoNrats have so often
done in the past. Please.

The suppressor in the patent is the great grandchild of the coaxial suppressor AKA: AWC MK-9, MK-9K and a few others.I have seen these using cone,K and M baffles.While old school I know this design works wonders on 9mm buzz guns and others that respond well to large volume design.These are not all tiny suppressors as the first ones were 12" long then 9 then 7 and shorter.Though large its still one of my favorite designs. 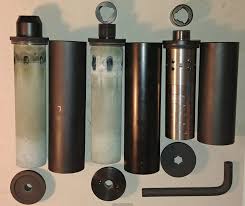 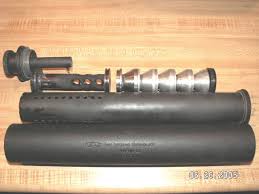 If you made the patent device and add a single baffle the suppression will increase significantly. The ability to change the position of the central core in the suppression tube will allow you to tune the device and reap additional benefits.You do not need to use tight clearances as you mentioned---but only in .22 caliber with a large volume.

-CL
The only reason after 243 years the government now wants to disarm you is they intend to do something you would shoot them for!
Top
Post Reply
4 posts • Page 1 of 1