Will gun and ammo prices soar if Hillary wins?

Links to popular or interesting stories in the news.

Please post links rather than copies of stories due to honoring copyright rules.

Will gun and ammo prices soar if Hillary wins? 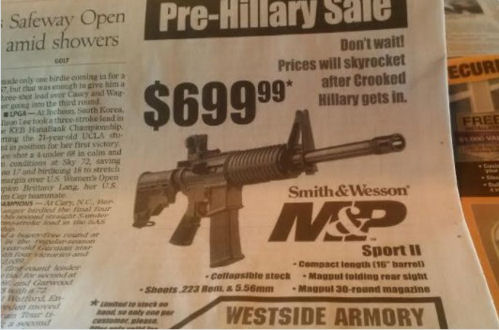 The above ad is by Westside Armory, an LGS in Las Vegas. Is the LGS owner correct in asserting that gun and ammo prices will soar if Hillary wins, so people should buy now (using fear to market)?

I doubt it. They may go up a bit short term but most gun owners got stung a few years ago and have stocked up. I know I have. I don't see .22s getting any better. They have not caught up from the last big panic buying spell. I know preppers who have bought bricks of .22 to use as trade goods.

The wild card that could affect gun owners is if Hellary gets a couple Supremes that are anti-gun, but that would most likely take years to sort out.

I just found the last powder I have been looking for (Bullseye). Personally, I should be fixed until I age out of the shooting/hunting thing. I have been buying primers since the price came back down by the 5,000 instead of the 1,000. My days of buying from gun show scalpers is definitely over.
Top

IMHO. We are only a couple of moves from a check-mate and if the hildebeast gets elected, it is game over. The rule of law is not being applied to everyone equally with those of a liberal slant being given a pass by this current administration as we have seen with the collusion of the FBI, DOJ, DNC and the hildebeast campaign. They can openly commit a crime with no penalty. Barry has already spoken of labeling those in the media with which he disagrees with an eventual target of silencing any and all dissent so it is obvious that not only the 2nd but the 1st are at risk. Once the SCOTUS is lost, federal decrees will be rubber stamped and we will have to live with it forever.

That said, who is to stop them from adding semi auto rifles to the NFA? Or to raise the tax from the current $200.00 to $10,000 or more? Will it require an act of congress? Will congress even try to stop them? Look at the track record since the 2014 mid term. Nothing but capitulation. As it stands, they can get an unconstitutional law passed, guide any lawsuits to friendly courts with any liberal activist judge and get a ruling in their favor.

So, again IMHO, the smart time to continue stocking up is now while prices are still decent.


My caveat for my dismal outlook. I am of the opinion that the union is dead. The carcass that remains is fetid and rotting. The federal government serves no purpose to the states other than to take and redistribute to those who will continue voting for those giving the handouts. Hopefully some states will decide the same and take issue with it.
July 5th, 2016. The day that we moved from a soft tyranny to a hard tyranny.
Top
Post Reply
4 posts • Page 1 of 1