Printable Guns the future of Liberty.

Printable Guns the future of Liberty.

There have been 479,000 views of Alex Jones interviewing Cody Wilson & his 30 rd magazine manufactured on his 1990 vintage 3-d printer.

And there are no comments from this community?

Are we so focused on our specific interests that we just missed How To Make a Magazine and Lower?
Top

There have been several 3D printing related threads here discussing printing all kinds of firearm parts, including silencers, as well as machine parts. In some of these threads the practicality, morality and legality of printing various firearm parts and accessories has been discussed.

A number of those threads are in buried/hidden forums and no longer viewable to the public.

Not every thread gets a response but that doesn't mean the topic hasn't been discussed somewhere else.

3d printing is cool, and the ramifications to the gun world are big, but this isn't going to change the reality of 'gun bans'. The fact is that build-ability of guns is not and never has been what makes gun prohibition work. People's fear of the consequences of the law is what makes the law work. Rifled barrels go back about 500 years (earliest examples, 200 or so to when they became common), reliable repeaters go back about 160 years, and machine guns have been around for a full hundred years. None of these things really need any machines you can't buy used because it's low technology. People who don't have the skill to build guns on those machines can buy or barter from people who do. They can't keep weapons out of prisons. they can't keep ships and trucks with tonnage of any damn contraband out there from crossing any border anywhere. It's not about availability. The only thing keeping people from having guns against the wishes of the state is their fear of getting caught, not any lack of availability.

OK, so a guy with no skills can print out an AR lower. Whoopty freaking doo. It's cool and all, but if it's against the law for him to do that he is no more likely to do so than he would be to get it some other, lower tech way. It's not like he can 3d print up a pair of balls.
Top

Its not the first party I have missed. Three -d printing is fascinating and it is my understanding that the miitary has used it to "make" skin grafts for its soldiers. Have also read where the manufacture of organs is in the experimental phase, so, printing out some 'nads' shoud inspire hope for eunuchs everywhere!

What excites me is the potential to make (for personal use only) of course parts & pieces that I may not be able to afford, obviously NFA laws apply but in some situations that may not be one's first priority.

I don't wish to beat a dead horse so...I will endeavor to find the "old threads". It does appear to me that 3-d printing levels the playing field in a "well regulated militia" v those who would like to see "us" disarmed.
Top

The problem with the idea of 3D printing supplying an army is it's slow and expensive compared to traditional methods. Maybe in another 10 or 20 years we'll have something closer to the Star Trek replicator but I think we're a long ways away from a 3D printer posing any real threat to either liberty or despotism.

Most of the old and most controversial threads are in forums that have been deleted so it will be difficult if not impossible to find them ... maybe they can be dug up in Google cache.

I didn't mean to turn you away or make you search, just trying to get you to start a discussion in a direction that interests you.

3D printing is certainly cool and I think we have yet to see the best applications. One of the most recent I read about is a mechanical prosthetic hand printed for about $50, a few thousand dollars cheaper than the current state of the art and it works better.
http://www.youtube.com/watch?v=BDtd2jNIwAU MUSAFAR!
http://www.youtube.com/watch?v=8CrOL-ydFMI This is Water DavidW
Complete Form 1s http://www.silencertalk.com/forum/viewtopic.php?f=10&t=79895
Top

Bio/med applications of 3d printing are really exciting. Wars always push medical technology forward in big steps. As ugly as that price is, the gains are great. Case in point, look at the incredible prosthetics being made today.
Top

It is slow, but it sure is fun 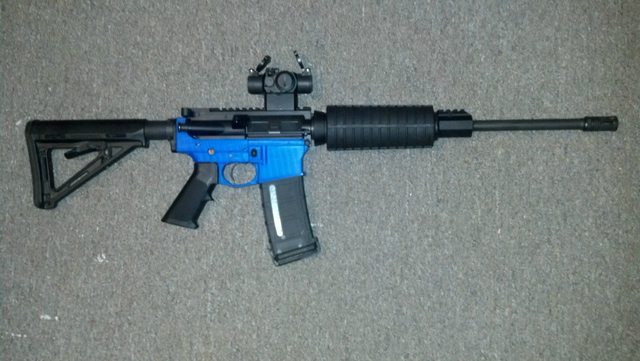 "If you are mad as hell and aren't going to take it anymore, grab your rifle and head outside.
If you're the only dumbass with a rifle screaming like a maniac, go back inside. It isn't time yet."
Top

I visited FN in Belgium around 2005 and their SCAR prototypes had 3D printed gas blocks. We, they. and everyone who does this stuff knew we could print a receiver, but it would cost more than making it another way. I don't believe that it will convince anti-gunners to give up on gun control as they will just work to ban the process of making a gun at home. Not that that would work, but they don't care if it works - they just care about having people send them money and so they can continue profiting from their non-profit (non-profits pay salaries - they just are not allowed to keep any left-over money so they have to spend it all).
Top

Will always remember the wisdom of the
Illustrious Graduate of Boston Public Latin School ( founded 1635 )
George Santayana that aways stuck with me and is still relevant:
"Those who do not remember the past are condemned to repeat it."


1559, The Pope has issued a ban on books
in "Index Librorum Prohibitorum". Any one caught reading
any of them .....

The Burning of the Books in Nazi Germany, 1933.
" ... Germany is beginning to purge itself of the alien and decadent corrupters
of the German spirit," e,g, ' degenerate Jewish science such as Relativity Theory'.

No doubt there is proposed legislation most assuredly being envisioned by the Soros-Pocahontas/Warren
loony left to register all laser printers and send programs used to print items
to their control centers.

The most indomitable human desire for freedom, liberty, and safety will always win.
That is why the US will survive because in its the very fabric/Constitution is woven the intrinsic value of the individual
above any system, a ground breaking idea first introduced 2000 years ago by a person whose birthday
we will be celebrating soon.

The precursor to the brave new world freedom machinery of laser printing was shown
in the great Clint Eastwood movie, "In The Line of Fire".