General silencer discussion. If you want to talk about a specific silenced rifle or pistol, it is best to do that in the rifle or pistol section for that brand.

Twenty rounds. Five subsonic, 15 supersonic. Four different bullet weights and designs. Everything performed flawlessly. Came home and disassembled the can. It was dirty but some Hoppe's and a toothbrush fixed that. After careful inspection, none of the "spacers" or the end cap came in contact with the projectiles. Happy camper here. Wish I could find out how effective this old solvent trap really is. The RO said he could definitely tell that it made a difference. I'm wondering if "clipping" the Hawk Innovative Tech spacers would help. Thoughts?
Top

Are they HIT's flat washer looking things or their actual cone shaped "spacers"? If cone shaped, do something with them. Washers...well, sorry.
Top

Even washers can benefit from some 'clipping' as in bending them on a shaped anvil with a punch. One side or two. Redirecting gas/pressure flow is essential if you're after suppression better than what you seem to be suggesting with "could definitely tell" kind of equivocation. Either it's quiet or it isn't. No need to mince around about it. Washers can actually do an adequate job if there are enough of them and if they're shaped into shallow cones and clipped/formed in such a way that they channel pressure off-bore. Look up Rusty's clips. DHC or something. They're pretty good on cones. Plain vanilla baffles don't do much. You need clips.
Top

They are the cone shaped "spacers." Because they aren't the typical cones, I'm thinking I need a specific clipping design for these "flat cones." Is that not true?
Top

Since I don't have a milling machine and these thin spacers are not easily clamped, what would think if I drilled a hole in each spacer (about in the middle of cone) and used a thin rod to align the spacers when they went back into the can?
Top

Looking at the site selling various cone spacers, it seems for the most part that they have enough thickness to allow cutting some clips without opening out the hole diameter. I'd drill a hole in a scrap of wood the same diameter as the front of the cone and set the cone into that, holding it there firmly, then use a chainsaw file or larger round file and cut symmetrical clips across the centre of each entry point. Use a file diameter about 2/3 of the bore hole size. No need to go very deep and weaken the edges significantly, just enough to break up gas flow.
Top

What the hell? That's exactly the wrong thing to do. Amazing. ACROSS THE FACE of the entry point of the cone, not parallel to the boreline. Was I unclear?
Top

I was trying to do something similar to my Rugged Obsidian 45 where the port is off the bore line. Ooops.
Top

This is the Obsidian clip: 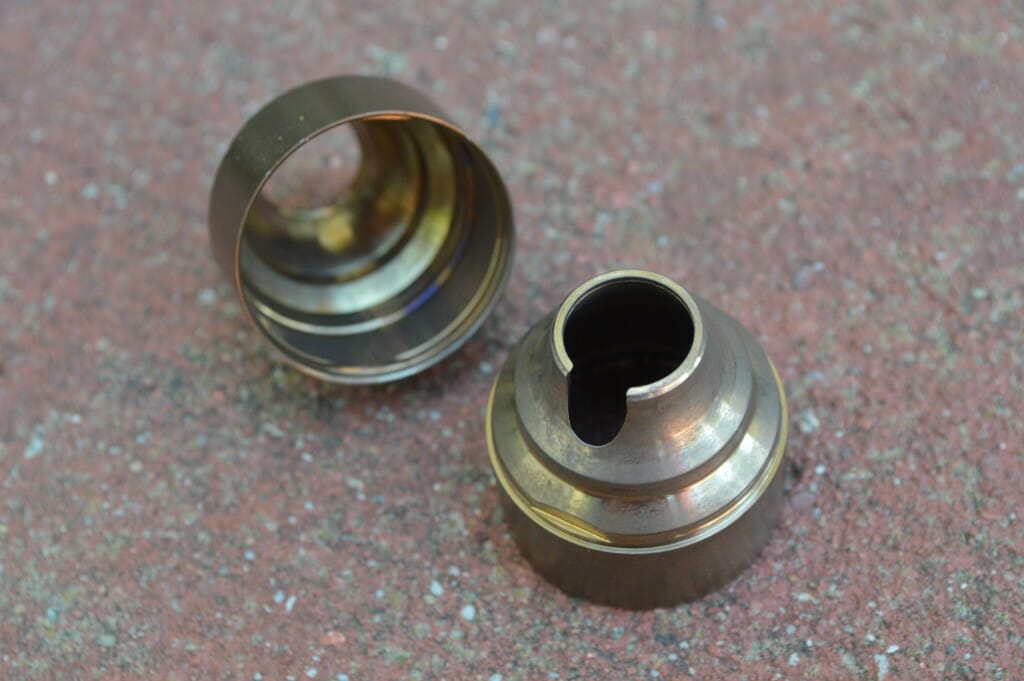 While the Obsidian 'clip' has always seemed to me a bit of a poor choice considering much more effective clip styles are easily done, with their steep and stepped cones it seems to work well. But if you compare the scale between the two it should be obvious your file work has left a much, much larger void. Seems likely to permit far more flow down the bore to the end cap, resulting in a louder suppressor. Your 'clip' is actually larger than the bore hole. Obsidian baffles have a clip mich smaller than the bore. The width of placement of theirs is also much smaller, owing to the steep done shape, where your baffle is almost flat, so a similar amount of metal removed results in a lot more face area being taken out of the way of pressure flow.
Top

As Dirty Harry told us, "A man's got to know his limitations." Problem is new guys usually don't. Back to the drawing board. Thanks for your help, a-canadian.
Top

Yeah, well, we were all noobs once. My first suppressor had a steel tube, ebony rear plug, brass front cap, and a perforated plastic tube wrapped in steel wool for dulling the noise of a weak airgun. It worked a little. Washers and spacers next. Then K baffles. K's are very satisfying when you do them right. Need a lathe though. Look at the completed silencer builds thread. Loads of useful links there.

Okay, I've slept on this matter for a couple of nights now and here's my new plan of attack. I'll buy a budget X-Y vice for my trusty Craftsman tabletop drill press. I'll buy a ball end mill bit. I'll make a jig to hold the "spacers." I'll make one cut across the "cone end" of the spacer just deep enough to open the sides and allow for some turbulence in the tube. 30 caliber being 7.62, would you recommend a 2mm, 3mm or 4 mm bit for the cut. Thanks.
Top

Have to admit I was lazy looking at your blurry picture of what looks like a slightly conical washer made of poorly anodized 6061 or maybe even 2023 alloy. I didn't notice (somehow, amazingly) that the bore hole was WAY off centre. Looking at it again in the context of your question above, which I found somewhat alarming, I decided to make the effort of drawing in where the bore is (the red circle) relative to where it should be (the green +), and the correct location for the initial bore hole shown in light blue. 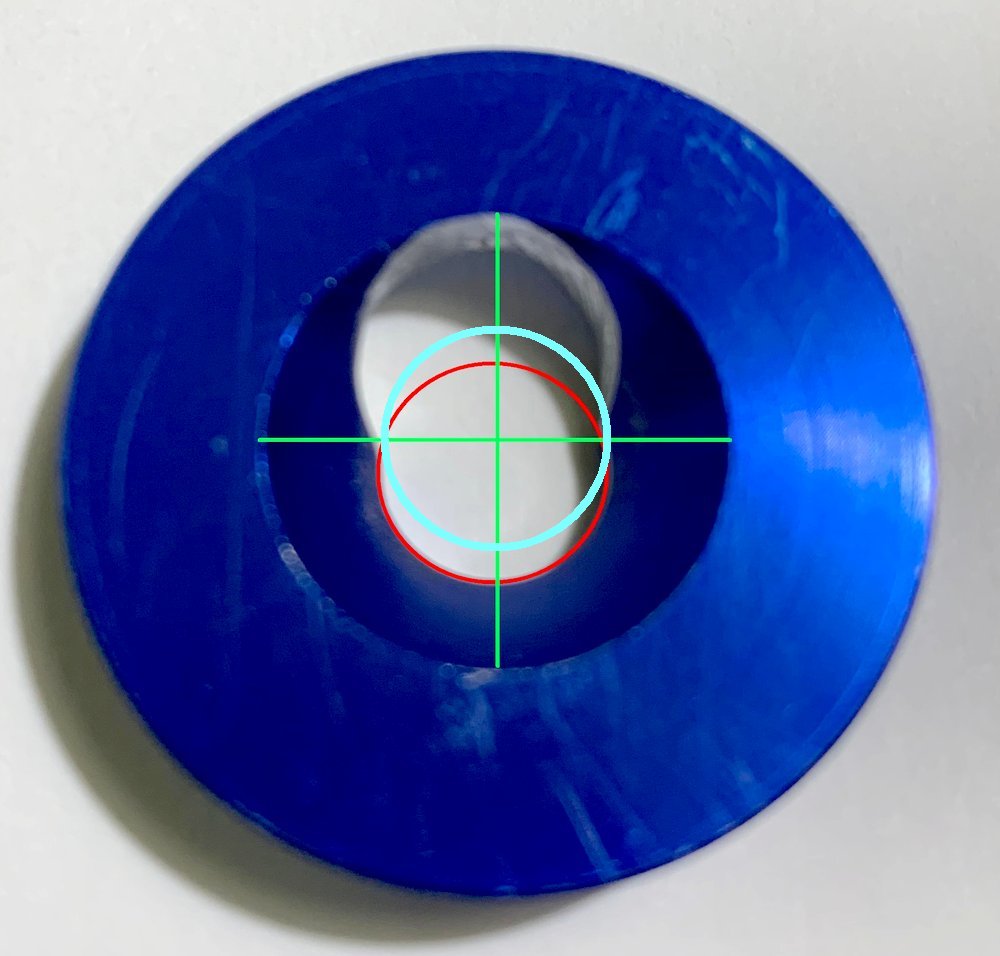 Did you drill this hole? I can't really tell. But if the hole was pre-drilled by the manufacturer, they have no business selling such nonsense, as a bullet is going to destroy that baffle on first firing. If you drilled it, your first priority needs to be setting up some sort of jig which will assist you in locating the drill such that you're not creating something which will be torn apart in use. Holes have to be centred, suppressors have to be bored inline with barrel bores, and suppressor tubes need to be aligned parallel to barrel bores. All that has to be happening at the same time, and then the holes have to be the right size for the bullet in use - in this case, if you're seriously suggesting firing 7.62x39 through a soft aluminum baffle stack, then a bore hole measuring 0.365" is probably a minimum value.

Oh wait, I see, found where you posted about the intended calibre - viewtopic.php?f=2&t=158762 - so it seems you are intending this for use on a .300blk rifle of some sort, that right? Baffle types and clip types vary a lot depending on the cartridge being used. So if you're using these aluminum baffles with strictly subsonic .300blk, maybe you'll not overwhelm their relative weakness. People do sometimes use 6061 for that cartridge. Usually with a steeper cone or with K baffles though. There's generally a lot of difference between .22lr and .30" in terms of pressures and potential suppression efficiency. What's the diameter of that blue baffle thingy? What's the bore hole diameter? How thick is the material near the bore area? Need to know that if I'm to make any suggestions regarding milling clips, as how much material is left after clipping will be important if this is truly for a higher powered cartridge. If the picture to which you linked is a typical example, I'd say it's a miracle you were able to fire a second shot through the thing you put together, even with .22lr never mind something more serious, as a hole that far off centre is a disaster in baffle making.
Top

a_canadian, when I took the can to the range, the "spacers" were NOT clipped. The can was on my 300 Blackout upper.

As I said there was no indication of a baffle or end cap strike. The spacers come with a 9.5mm center hole. That's a 1.88mm clearance. I'm sure that's way too much clearance for an efficient can. In fact I'm wondering with that much clearance if clipping would make any difference at all. Maybe I should just stop here and buy a store-bought. I'm just not to be a Form1 builder.
Top

Well if you say so, but that's confusing considering how obviously off-centre that hole is in the image you shared. Perhaps that one wasn't part of the build you test fired?

In any case, those parts don't really seem adequate for .300blk. Perhaps they'll last a little while, and if you stuck to subsonics maybe a while longer, but for that sort of cartridge you ought to be looking at stainless, or at least titanium, to get the sort of mechanical strength and erosion resistance needed. 6061 wears pretty fast with rimfire. 7075 is better there, but that metal didn't look like 7075, too white, unless I'm being fooled by lighting. If I were stuck with using aluminum for .300blk I'd make fairly heavy walled K baffles or deep cones, at least 3mm thick everywhere.
Top

a_canadian wrote: ↑
Mon Sep 14, 2020 3:45 am
Well if you say so, but that's confusing considering how obviously off-centre that hole is in the image you shared. Perhaps that one wasn't part of the build you test fired?

a_canadian, are you telling me you're judging concentricity from a cellphone pic where the lens was obviously not in alignment with the object? In fact that very spacer had 20 rounds of 300 Blackout pass through it. And the anodizing on the inside of the hole was pristine before I started messing with it. It's NOT off-center. You are right in that it's not made from NASA nose cone material and will likely wear quicker than other more expensive choices. But given the perfect alignment with the bore, I don't think it poses a risk to the shooter. I'm thinking I'll buy a store-bought can for the 5.56. This was a fun learning project. The main take away -- you get what you pay for.
Top

Guess we have different perspectives on what perspective does for geometry... but I'll leave it at that. Good luck on your adventures.
Top
Post Reply
19 posts • Page 1 of 1